Fresh Porridge
Made with milk or water with your choice of Sweet, Salty or Plain

Selection of Tea, Coffee, Toast and Cereal (inclusive of pastries)

Breakfasts are Inclusive for all Hotel Residents

Hot Porridge made with Quaker oats and Skimmed Milk. You’re choice of Sweet, Salty or Plain ~ £3.50

Sunday Roasts are available every Sunday

Selection of Ice Creams and Sorbets 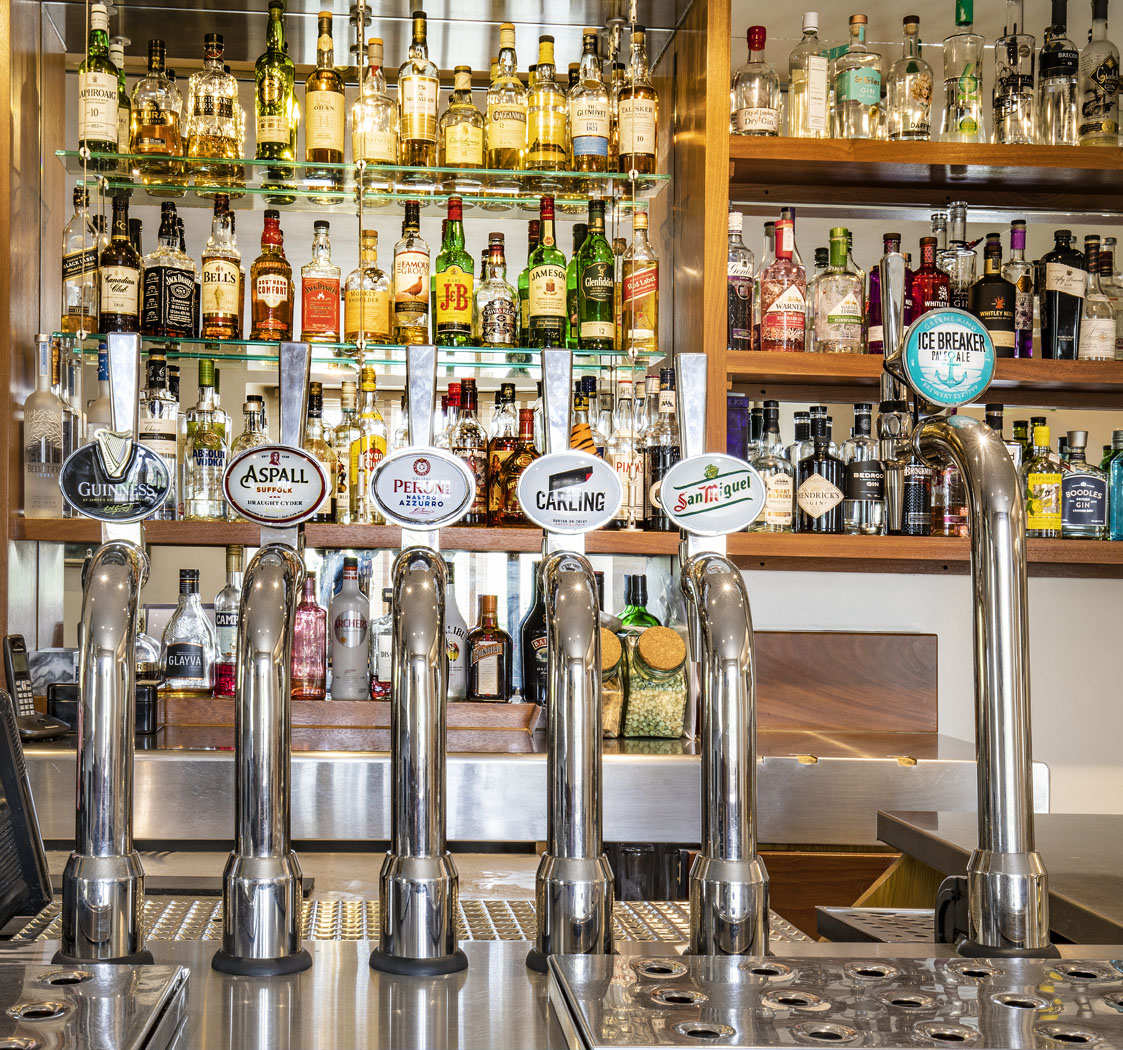 Contemporary bar offering a wide range of ales, lagers, spirits, with a choice of over 70 gins and an extensive wine list.

Carling is brewed to have the perfect balance of sweetness and bitterness, giving it that brilliantly refreshing taste from the first sip to the last. (4%)

It’s an easy drinking, session ale with a hoppy taste and aroma making it clean, crisp, and moreish. (3.6%)

Guinness has a malty sweetness and a hoppy bitterness, with notes of coffee and chocolate. A roasted flavor also comes through, courtesy of the roasted unmalted barley that goes into its brewing. (4.2%)

Light and clean like a pilsner beer, this import beer is a crisp and refreshing European lager with a delicate balance of bitterness and citrus and spicy aromatic notes combined with a fast and clean finish. (5.1%)

San Miguel is a pilsner-style lager, golden yellow in colour with reflections of old gold. On the nose it offers hints of smoke against a background of grains. On the palate it is balanced, toasted, of medium bitterness with a prevailing subtle toasting of the barley. (5.0%)

“Real ale”, or “Cask ale” as it’s more properly known today, is a living beer, containing brewers’ yeast that continues to ferment and nurture the beer as it lies in the cellar. At The Kings Head we are proud to serve and support local Norfolk breweries, with Woodfordes being our personal favourite …

Revenge is best served bittersweet. Our wholehearted harmony of hops, fruits and barley pays homage to brave Admiral Nelson and his crew. Nelson’s is a Norfolk beer, and glory in the taste and aromas of citrus and Norfolk malts we’ve crammed in. (4.5%)

There are hundreds of distilleries operating in Scotland today, but everyone must mature its whisky in the country for at least three years and one day within oak casks. A single malt whisky is produced in batches from only water and malted barley and yeast within a single distillery using copper pot stills.

To make Benriach Twelve, Benriach spirit is three casks matured for at least twelve years in sherry casks, bourbon barrels and port casks. The whisky from each cask is then expertly married together to create a smooth, sherry-rich single malt, layered with baked fruit, maple honey and cocoa, perfectly balanced with a lingering sultana and spiced mocha finish. (46%)

Smooth aromatic heather and honey sweetness, Dalwhinnie 15-Year-Old is a clean, crisp Scotch which provides a perfect introduction to the delights of single malt whisky. Dalwhinnie is the highest and coldest distillery in Scotland and was founded at the end of the 19th century. (43%)

Creamy with a long, smooth, and mellow, finish. Our 12-year-old is the perfect example of Glenfiddich’s unique Speyside style and is widely proclaimed the best dram in the valley. (40%)

Glenkinchie 12-year-old shows off the characteristic lightness and grassy elements that lowland whiskies are known for, with nods to cooked fruit and sauternes’ wine along the way. (43%)

To create whisky with a tropical feel, our makers finished a portion of our smooth whisky in barrels that previously held Caribbean rum. The result is a well-balanced and exceptionally smooth whisky. Single malt, meet summer. (40%)

To truly capture the essence of George Smith’s vision, The Glenlivet Founder’s Reserve has been created using the time-honoured distillation methods that he introduced so long ago. Made with water from the same crystal-clear mountain streams, in the same cold, pure air, The Glenlivet Founder’s Reserve is as smooth and fruity as the whisky that first ran from the original copper pot stills. (40%)

It has the subtle smoke characteristic of jura’s excellent isnad single malts, with robust vanilla and an intense kick of sherried sweetness underneath. (40%)

16 years, this much sought-after Single Malt has the massive peat-smoke flavour that’s typical of southern Islay, while also offering richness and a dryness that turns it into a truly interesting dram. (43%)

The smoke from the unique Islay peat gives Laphroaig its rich flavour. This peated whisky is renowned for its bold, smoky taste, followed by a hint of seaweed and a surprising sweetness. Full-bodied with a long finish, it truly embodies the quintessential Laphroaig character. (40%)

An intriguing single malt that celebrates the coming together of two styles, Double Cask Gold reflects a perfect harmony of flavours and natural colour. The perfect partnership of American and European Oloroso sherry seasoned oak casks creates this burnished gold whisky with a distinctive character, that leads with American oak style before giving way to classic Macallan flavours. (40%)

Underneath Talisker’s smoke, which aren’t as all-pervading as Lagavulin, is a sweet pear-like quality. When young there are notes of the land. (45.8%)

Simple unpretentious and classically simple, why not pop in and enjoy a classic Gin & Tonic we prefer to pair are wide gin selection with fever-tree premium mixers. With their carefully selected naturally sourced botanicals and perfect carbonation. Fever-tree mixers have been created to enrich the taste of the finest spirits. Pair your choice of Gin with your favourite mixer or why not selected from are personal and preferred combinations below …

Bombay Sapphire has a fresh citrus and juniper balanced with a light elegant spicy finish. (40%)

Exceptionally well balanced with a classic and clean juniper finish. (41.6%)

A symphony of cucumber and rose petals, balanced with juniper result in an iconoclastic exquisitely delicious gin. (41.5%)

Black Shuck Pink Grapefruit Gin has been distilled with traditional botanicals including juniper, coriander alongside plenty of plump grapefruit. (43%)

A truly fresh raspberry flavour with a mouth-watering citrus and floral finish. (43%)

Inspired by the Norfolk coastline, Coastal gin has a delicate, salty influence complemented by bright citrus flavours. Refreshing hand foraged sea purslane, marsh samphire, sea aster and the rich woodiness of Douglas fir dance on your palate and bring a sense of the seaside. (40%)

Lovely fresh citrus notes with a juniper background. Orange and pink grapefruit come through to create a deliciously dry finish. (47.3%)

The sweet ginger ale complements the heat of the Indian Ginger botanical. (40%)

Sometimes you fancy a glass of light refreshing white, whether your preference is for. The King’s Head Country Hotel has you covered. From a wide range of whites served by the glass and by bottle service …

9. Gavi ‘Palás’, Michele Chiario Piedmont’ Italy – £29.50 (An easy drinking and refreshing wine with flavours of pear and with a vibrant lemon peel finish.)

Sometimes you fancy a glass of red, whether your preference is for. The King’s Head Country Hotel has you covered. From a wide range of reds served by the glass and by bottle service …

Red and black fruit aromas of juicy cherries and plums with a touch of chocolate.

With subtle floral aromas surrounding a core of fresh red fruits enhanced by nuances of fennel.

A well structed Gevrey-Chambertin with a robust flavour and a firm finish.

Vibrant and fruity with a heady mix of juicy red fruits and vanilla combined with dark chocolate.

A traditional style Bordeaux with an element of rusticity and a robust finish.

A traditianl yet modern style Châteauneuf with an elegant and velvety red berried quality through to a fine and long finish.

A traditional Chianti with flavors of sour red cherry, delicate and slightly savoury.

For when you just need some fizz: The King’s Head Country Hotel …

A fresh and fruity sparkling prosecco with fine bubbles

Refreshing notes of lime and lemon combine with floral nuances honey, and brioche on the palate. Elegant and fresh.

This fine champagne displays raisins vanilla, and brioche together with toasty aromas.

Made from 100% Pinot Noir, this is clean and wonderfully fresh with a suppleness on the palate and a lingering fresh.

A full flavoured, fine, and precise Champagne with notes of toast, soft peach, a hint of liquorice and an opulent palate with a refined, silky finish.

A rich deep golden Champagne, wonderful scents of citrus interlaced with notes of fig and toasted hazelnuts. An exquisite mouthfeel that is lively but precise, with a creamy seductive finish.

No longer just a ‘girlie’ tipple, rosé wines are really deserving of their own section nowadays …

Luscious sweet oranges and apricots on the palate, with bittersweet orange marmalade notes which balance well with the fresh lemony finish.